skip to main | skip to sidebar

Waspkill Croydon wasp removal in The Local Guardian 14 may 2008 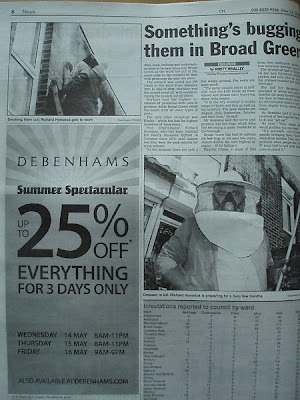 Richard of Waspkill has recently appeared in an article in The Local Guardian newspaper, on 14 May 2008. The photograph below shows the article, which followed on from The London Tonight TV appearance in September 2007, and The GMTV feature on 8 may 2008.
Wasps nest problems are starting to occur throughout the Surrey and South London areas, as it is the beginning of the wasp season. If you have a wasp nest that needs treating,and you live in South London or Surrey, please call 02086515008 for immediate service. Waspkill is a family business established in 1973, and based in Croydon, South London. Visit Croydon wasps for more info on Wasps nests.
Posted by waspkill at 01:22